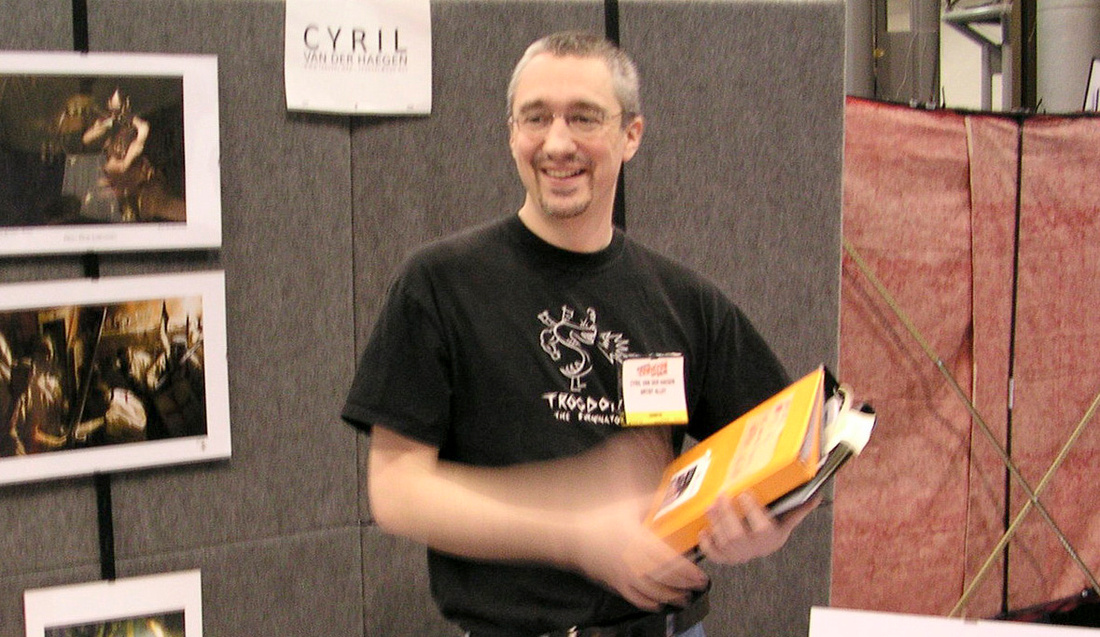 ART AUCTION 2!  NOW COMPLETE!!!
Thanks a ton for all who participated in the donating and bidding.  We raised 18,208.67 minus eBay and Paypal fees.  Special shout out to Jeff Easley, who's painting raised an amazing $9001.01.


We held a series of eBay auctions beginning on the Fourth of July, in support of our friend and fellow Illustrator Cyril Van Der Haegen, as he deals with a rare, life-threatening illness.


Cyril has had an on-going series of seemingly minor health problems that have kept him feeling cruddy for the last couple of years.  Late in 2011, he went to see a doctor about one of these, and after a blood test, they rushed him to the emergency room for treatment because of dangerously low blood platelets. He was diagnosed with Idiopathic Thrombocytopenic Purpura, or ITP.  It's a form of Leukemia which causes his immune system to destroy the platelets in his blood.  Symptoms include fatigue, and lack of blood coagulation if he is cut or bleeding.  ITP is a chronic condition, and current treatments have a 50% cure rate.  In Cyril’s case, even the newest “wonder drugs” have proven ineffective in reversing his condition.  He is currently on the drug Promacta to keep his platelets from plummeting.  When they fall below a critical level, he has to go to the hospital for a day of intravenous platelet booster.  That has been happening about once every three weeks.  To determine why the standard drug therapies were ineffective in reversing his ITP, Cyril had a bone-marrow biopsy, and was diagnosed with a second disease called smoldering Myeloma, which is a cancer of the plasma cells.  It’s called 'smoldering' because the cancer isn’t growing aggressively.  While it hasn’t infected Cyril's bones or organs at this point, it is an incurable condition, and the best hope is to keep it in remission.  In addition, Cyril has had ongoing severe joint pain, and his doctors have not yet been able to diagnose the cause.  To date, medications have made him further fatigued, and resulted in nausea and a loss of focus.  Ultimately, if there is no upswing in his platelet production through drug therapy, Cyril may need to have his spleen removed, which should eliminate the ITP, but not the Myeloma.
As you can imagine, Cyril is also fighting to keep his spirits up.  As is the case with many artists, Cyril is self-employed and uninsured.  Fortunately, he is able to work, and has qualified for very low-cost medical assistance from a good local hospital.  We are organizing this auction as a way to help him deal with the uncovered costs, as well as his living expenses while he undergoes treatment.  It's our hope that a strong response to this effort will help bolster his spirits as well as his finances, and the response to date has certainly been HUGE in that regard.  Many thanks to contributors and bidders to date!
For updates on Cyril's health and well-being, you can check in on his Facebook Page.
Interestingly, our scheme the first time around included running the eBay auctions during the San Diego Comic Con, July 11-15th, but there was not a single buyer who picked up their winnings there, and no one specifically asked to see an auction piece in consideration for placing a bid.  As a result, the planned timing for this auction during Illuxcon V doesn't really make sense, and the logistics are much simpler without an analogue display.  In addition, it is best if proceeds are received by Cyril in the next tax year, in order to maintain his current eligibility for medical financial aid.


The following artists, and other fine people, have donated a piece of art for this auction.  (Some of the art pieces donated for the prior round were delayed to this round, because eBay had a total auction number cap because Cyril was an infrequent seller - and several pieces have been donated by anonymous do-gooders)
Rebecca Guay
Arnie and Cathy Fenner
Raoul Vitale
Matthew Stewart
Chris Moeller
Volkan Baga
Chuck Lukacs
Ian Miller
Jeff Easley
Kevin Murphy
Tom Greenway
Donato Giancola
Mike Sass
Click here to see the art that has been completed to date.  You can also subscribe to this gallery by RSS Feed by clicking the icon at the bottom of the gallery.
100% of the profits from this auction will go to assist Cyril in his ongoing struggle with his illness.
If you can not bid on art, we get it...  we're artists, and understand that we are not such an affluent bunch.  If you want to help, every bit counts.  We've set up a funding page at fundly.com to allow monetary contributions of any amount you want to donate.  Please do!  Even a couple of bucks will help, and the fundly site has raised more dollars for Cyril than the first round auctions.
We'll send eBay links out when we have the auctions set up.  We'll post the start date here as soon as we know it.  If you can bid, please do.  Your winning bid will not only give you a stunning piece of art to hang on your wall, but will help support Cyril in both his life and his art.  If you don't win, please consider a cash donation of any amount.